Holing up in the depths of the countryside, nothing happens, too quiet, you will forget about civilization, are just a few comments were heard when we left England. After a few months here, France couldn’t be further from any of this. The countryside is noisy, from the early morning daily collection and delivery of thousands of gallons of water from the river to the cows, the tell-tale water drip that runs down the street from the leaky tap, to the late evening crickets getting their mating pennies worth in before bed-time, sometimes I come to think London was a peaceful place to live.

At five in the morning the sleeping sparrows awake. Not a slow awakening, but an immediate unified chorus, or more like a din, of shouting. Flurries of feathers, stretching wings, telling us it’s time to get up. The chickens tumble awkwardly off their tree perch, and spend half an hour jumping up and down like ballerinas in practice catching the still sleepy gnats and flies. One gets an insect and their off, chasing each other round and round to try and steal the find. Chickens can run very fast when they want to. The best way to steal the food, sit on your chicken friend, maybe peck her, or stand on her feet so she can’t move! All over a small bug, when there are many within a peck distance. But no, they want the other chickens bug because it might be a better one than they have found!

At breakfast, Chirpie our resident male Sparrow sits on our window balcony and shouts at everyone passing, lady sparrows, the two devoted turtle doves, the lizards, the chickens. Puffed up and important on his roost he cheeps away for almost an hour, whilst every other sparrow ignore him and ascends on the chickens seed for a greedy breakfast. After lunch he is quiet and perches on a little apple branch to watch the world go by. He should have a mate like the others, but he always seems to be on his own, being noisy.

On our roof, the sparrows and other small birds make nests, bringing worms and nest material to the hungry wide mouthed babies. We have had to block the eves as they fall in our roof space and cannot climb out – with fledglings still unable to fly – sometimes they fall out of the nests and have a harsh drop onto our corrugated roof. Its not a pleasant end to a very short life, so we are trying to push them away to nest elsewhere. But they still squeeze in the tiniest space and squeak away until fed.

Bulls bellow in unison for a good half hour, testosterone fuelled and impressing the girls. Last week, after a bad week of not sleeping due to heat stroke, horrid, dangerous, I had finally fallen in to one of those luxurious early morning slumbers, only to be woken loudly by two bulls having a very heated exchange. No wonder Elephants are also called bulls, these two trumpeted for almost an hour, a strange mixture of elephant, almost donkey.

A loud buzz mid-morning means our white bottomed bumble bee has arrived to scout about for pollen or just because he is curious. Other solitary bees check on holes in the workshop and veranda and carry tiny leaves to plug found holes where they will sleep later.

The flies annoy everyone. The poor cows spend all day flicking ears, tails and hind legs for these revolting insects. They swarm of faces, sit in the corner of watery eyes and nip and bite. Sometime in our hectic schedule I dream of inventing a anti-fly solution that can be rubbed on the cows faces at least, maybe via a pad installed by their water. Cows like to scratch and this could be a solution, with the scratching they get the fly protection. Just an idea.

We have two fly doors, an inner and an outer and they work well. The flies like hot walls to sit on and the cooler grey netting seems to deter them. With the huge clean-up we have achieved round the house, laying gravel, building shade, the more unwelcome insects have cleared off.

Ants and gnats, or the very few we get, are dealt with by our group of lizards. Smart, fast and enjoying our new stone step area, they bask in the sun, play chase, nipping each other tails or creep into cracks and crevices round the house to snooze. The steps to the workshop have a terrace area, tiny, but with terracotta tiles on its edge – perfect for sun-bathing. The stones afford a large expanse of sun-bathing and shady sleeping areas. Lizard heaven. 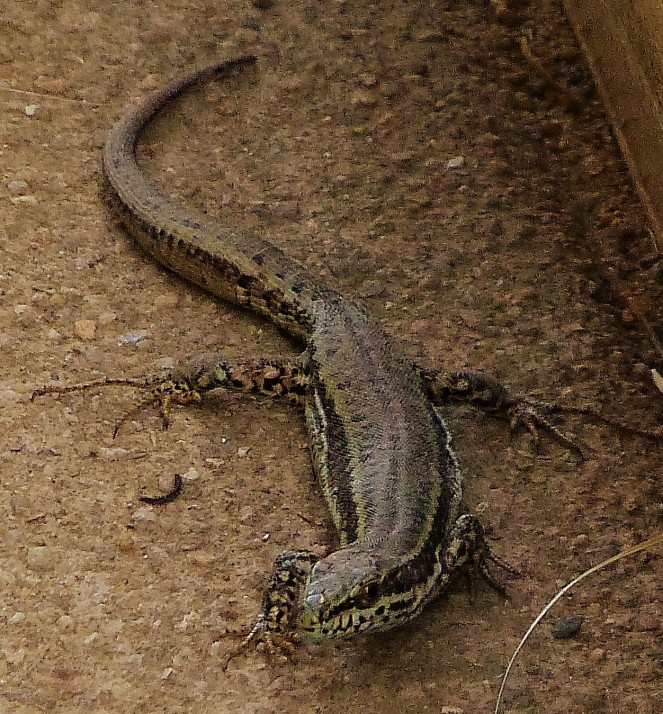 A couple of hours before lunch and the tractors, or threshing machines, balers roll up and down from field to farm. In June the first mow of the wild flower verges to keep the roads clear but encourage regrowth to September. July it’s hay-making and weed spraying – the nettles and thistles have to go. In September the fields will be scarified and manure spread. Fertilizers added and cows moved for a final couple of months before heading to the barns for winter. Hedge cutting brings the hedges down by a good half and by some amazing feat of nature, she recovers every spring, from what at first seems a destructive culling.

Christian is still trying to catch the beavers in our local pond. They are unwelcome in fields with cattle. I have seen them a few times, these big brown rodent like creatures, hurrying away, slipping silently into the pond and down under the tree roots to their underwater burrows. Not often you see a beaver, and at first I thought I had imagined them. A bit like the frogs, cannot see them, but they croak and wheeze and make plopping sounds as they hop into the water to hide from us.

Forever slow and at the risk of getting squashed the black beetles pass across the road to our garden and back. Six tiny legs that seems far too skinny for such big armoured bodies. They can fly, we have seen one in the vegetable garden, but more often laboriously climbing across grass stems like the last contestant in an army boot camp session.

Our two turtle doves bill and coo all day – they are so in love. For a few weeks one was alone and busy collecting twigs. He, we assume, struck lucky and found a mate. Then a week ago Tony saw one dove rise swiftly out of the apple tree with a baby rat attached to its foot. The rat was screaming, as well it might flying into the air. But luckily it seems dove was uninjured. The rats have to go. We are plotting, but are afraid if we poison them, we could end up poisoning our neighbours cat at the same time – and that would be unthinkable – the end of friendly neighbours forever.

Colleen the neighbour’s cat makes her late afternoon rounds of her territory, always looking surprised when she sees us, even though we are here every day. She is after field mice and climbs the hay bales in the barn to get a vantage point. For the last two years she has patrolled our ruin of a barn, chasing mice from our boxes. Slipping through a small glass-less window, she has spent many hunting hours in the barn. But now with most of it swept clean for renovations, she now scouts our garden and keeps her distance.

But she hasn’t killed the rats yet. Bramble, my little tortoishell, whom I had to leave behind in England, would have stalked out the rats and terrorized them. A good climber, she would have made it her sole purpose in life to get those guys. No problem.

Moles – until you have them, you cannot understand how destructive they are. We hadn’t noticed them under all the long grass and brambles but now we have cleared all the undergrowth and laid the workshop to gravel, the fifty hill and increasing were turning the area into a lumpy mess. Dangerous too as the main burrow holes are deep. Snaking all over the ground are feeding runs, just below the surface. Moles eat their body weight in worms every day and they sleep four hours and feed four hours – all the time. We tried to catch them, we have three, but it was useless. Every shop trap is either vicious or puts a chemical into the ground.

Resolved, and not getting sentimental, they are cute guys, but Tony invented a humane way to kill them quick. Three attempts, three moles despatched – that’s a good invention. Very sensitive they die almost immediately they are injured. Given underground they have hardly any predators, they are bound to be shocked by such an intruder. “Les Trois Taupes”, were given a decent burial in our garden, with wildflowers and a tile to mark their spot by the oak. I took a few photos as it’s not every day to get to see or hold a mole. A whole life underground in the dark – to what end? No idea, but not to say we won’t get other moles. They say never invite a mole to another moles funeral, as he will probably stay and set up home.

As the sun sets, the pink glow falling across the far fields below our land, the birds take off in flight in rolling and curving groups, soaring across the fields and back. A display of perfect co-ordination in flight. Then landing to fight, squabble and shriek at each other for sleeping space. You can imagine the punch-ups. You’re in my space, no my space, your standing on my foot, can you just move your bottom a bit, etc. Hold on, can all of you just quieten down here, it’s the end of another tiring day and we all want to get to sleep.

The sun sets, the crickets chirp away in the last heat of the day and suddenly at almost midnight, there is a silence. And round and round we go. In just five hours the silence will break and everyone will start up as if it’s the first time they have ever seen the sun. Where are my earplugs…goodnight!

2 thoughts on “So noisy in the countryside”

This site uses Akismet to reduce spam. Learn how your comment data is processed.

A French life, photography, projects and living the good life.